The country dresses up on King’s Day.

The Dutch monarchy has mostly ceremonial significance. Although not passionate royalists, most Dutch feel quite comfortable with the constitutional monarchy. Once a year, on Koningsdag (King’s Day), the country dresses up in orange and the royal family is a source of communal celebration. 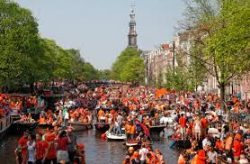 On Koningsdag, April 27, the Netherlands celebrates the King’s birthday. In most towns and villages large markets are held, surrounded by all manner of festivities. Full of good cheer and dressed in orange, the Dutch crowd market stalls and terraces, and the party ends in fireworks.
The monarch joins in the celebrations, traditionally visiting two towns in which he is treated to demonstrations of sack racing, clog-making, herring-gutting and other traditional activities.
Willem-Alexander (or ‘Alex’, as he is popularly known) shows his best side, shaking hands and showing interest in every drawing handed to him by beaming preschoolers.
King Willem –Alexander is somewhat more outgoing and closer to the people than his mother Beatrix, who abdicated from the throne in 2013 after reigning for 33 years. Thanks to his marriage to the extrovert Argentinean, Maxima Zorreguieta, who is by far the most popular member by the royal family, the Prince developed a personality that is appreciated by many Dutch: serious, interested and unifying.

The House of Orange has a history. When in 1815 the Netherlands finally became a constitutional monarchy, known officially as the Kingdom of the Netherlands, the House of Orange became its sovereigns. Nevertheless, there were also moments in which the Orange’s lust for power clashed with the civic culture of the Dutch. Today, the Dutch are not fervent royalists, but most of the population feels quite comfortable with the constitutional monarchy.
The average Dutch person is not bothered and faithfully puts on an orange T-shirt on the King’s birthday. Nowadays, the ‘orange feeling’ has spread to other events as well. The festivities on the occasion of Liberation Day have a similar orange character. And if the Dutch football team is in a major tournament, the country succumbs to orange fever as well.

The Netherlands is quite a small country, but, as mentioned above, it has its own, unique culture.
If you learn Dutch at European Language Centre, you not only learn the language, but you also become familiarized with the culture.
Interested in learning Dutch? At European Language Centre, you can start very soon! More information about our Dutch language training for expats can be found on our website. You can also call us on (0031) 20 609 79 70.

If you are in the Netherlands already, have fun on Koningsdag!